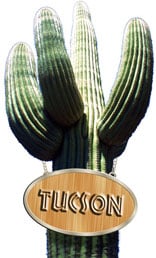 VIENNA - Living in Austria, one of the first questions I'm asked is where I'm from. After the standard reply of Tucson, comes the second, more difficult question: What's in Tucson?

For me, this usually boils down to one of three answers:

I don't think I have to point out that the third one usually wins out. For that matter, in most world markets the name Tucson is more associated with the Hyundai SUV.

The problem is this: Tucson is the Eyesore of the country. We might as well put up a big sign at the airport saying, "thanks for noticing me." But while Winnie the Pooh's depressed, donkey sidekick comically downplays his own importance, Tucson seems to do the bare minimum when it comes promoting the region instead of presenting a unified vision of why Tucson matters.

Let's play a game. What's the first image that pops into your mind when you hear San Francisco? San Antonio? St. Louis? If you thought of the Golden Gate Bridge, the Alamo and the Gateway Arch, congratulations you've passed basic geography.

What these cities have that Tucson lacks is an identifiable symbol. Yes, the world has heard of us, but not for the reasons we'd like.

Here in Vienna there's the Danube, a giant Ferris Wheel, Johann Strauss and chocolate cake. I don't have to mention the landmarks of London and Paris for you to get my drift.

So where's the value in building an orange bridge, or one half of the McDonald's logo, as in the case of St. Louis' monstrous parabola.

The 2007 book "Tourism and the Branded City," argues that successful city branding contributes to economic growth and happiness of its citizens. While the bulk of the book deals with the effect of a city's character on how it's portrayed in film, it highlights the emerging field of place branding.

Cities, like Coke or McDonald's, are now the focus of elaborate marketing efforts usually reserved for brand-name products. The concept is the same, if you don't control the image your brand conjures in your consumer's head, someone else will.

For example, the mention of Starbucks or Seattle invites very specific images (in this case, the city is intertwined in the lore created by the coffee company).

Let's get unscientific for a moment and consult what other cities are doing on Wikipedia. Punch in New York or Chicago for example and you get a main picture featuring at least a half-dozen different symbols for that particular city. Look up what Tucson has on its page and you see a distant shot of a skyline. No saguaros, no solar panels, no gunslingers, no San Xavier, zip.

For simplicity's sake, when I say Tucson I mean the Tucson metropolitan area which has a population roughly double that contained within the city's cookie-cutter metropolitan limits. After all, if a major company locates itself in Oro Valley, that benefits the entire region, not just the town at the foot of the Catalinas. Tucson ranks No. 52 in the 2010 U.S. Census' count of largest metropolitan areas (but hey, we're 33rd in the largest cities count).

Immediately above in the metro count is Rochester, N.Y., which has way more going for its Wikipedia page. Below in No. 53 is Honolulu, whose tropical images I don't have to remind you of.

Even Detroit has a better photomontage than we do. For all that city's image problems, at least someone bothered to put up a few nice pictures on its Wikipedia page.

Perusing the National Register of Historic Places, Tucson boasts the Pima County Courthouse, the University of Arizona's Old Main and the Fox Theatre, all of which are candidates for branding the city. Thankfully, the city has dodged a bullet in declining to build a monstrosity of a downtown hotel in hopes of attracting conferences and other events. What the area needs isn't the accommodations, but the events themselves.

In popular memory Austin, Texas, itself Tucson-sized, is known for a thriving music scene and the South by Southwest (SXSW) music and technology festival that has grown from it. As Tucson already has a strong music culture engrained into it, there is little keeping it from developing its own annual festival that dominates the tech/film/entertainment press. Since its inception, SXSW has grown from a regional festival whose inaugural event in 1987 expected to draw no more than 150 people to a behemoth industry event that last year injected $113 million into the Austin economy, according to a recent report.

On our own festival front, there's the Gem and Mineral Show, the Dia de los Muertos procession and the Tucson Festival of Books. That growth won't happen overnight for any of these events that already have a presence here, but a concerted effort by the city's leaders and event planners could expand some of these to national status.

What about Albuquerque and Portland, Ore., two cities Tucson leaders love to compare themselves to. New Mexico's largest city is famous for the annual hot air balloon festival. Portland? It's gaga over their revitalized stadium and the new Major League Soccer team that came with it.

If Tucson's leaders truly think Tucson is a place worth living in, investing in or visiting, it's time they did a better job of telling the rest of the world about it.

Nicholas K. Smith, a former reporter for Inside Tucson Business, is a freelance reporter now in Vienna, Austria.