You have permission to edit this article.
Edit
Welcome, Guest
HOME
ABOUT US
EVENTS
NEWS
OPINION
PEOPLE IN ACTION
ON THE MENU
CALENDAR
NEWSLETTER
BOOK OF LISTS
Jobs
DONATE!
1 of 3 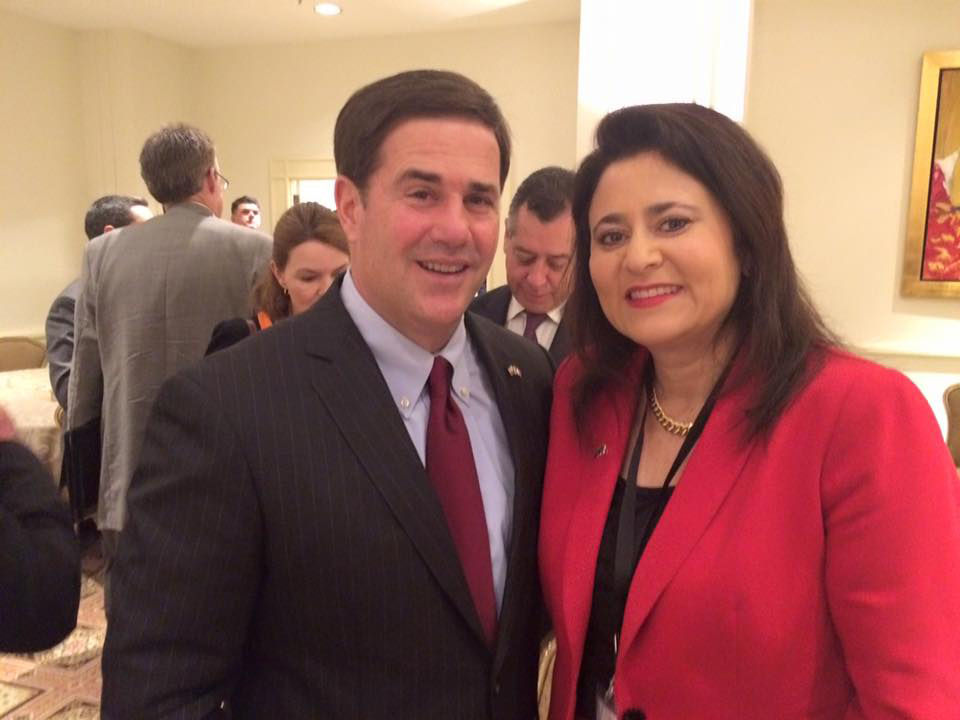 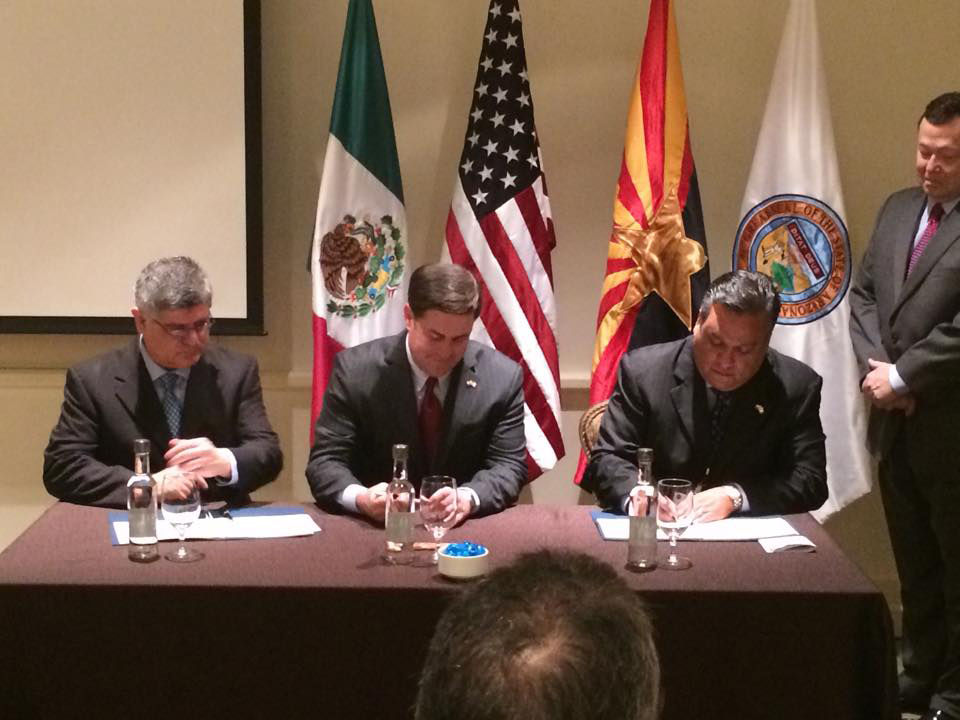 Gov. Doug Ducey, center, signs an agreement to create a Mexico desk by the Tech de Monterrey at the Phoenix NPR affiliate, KJZZ. 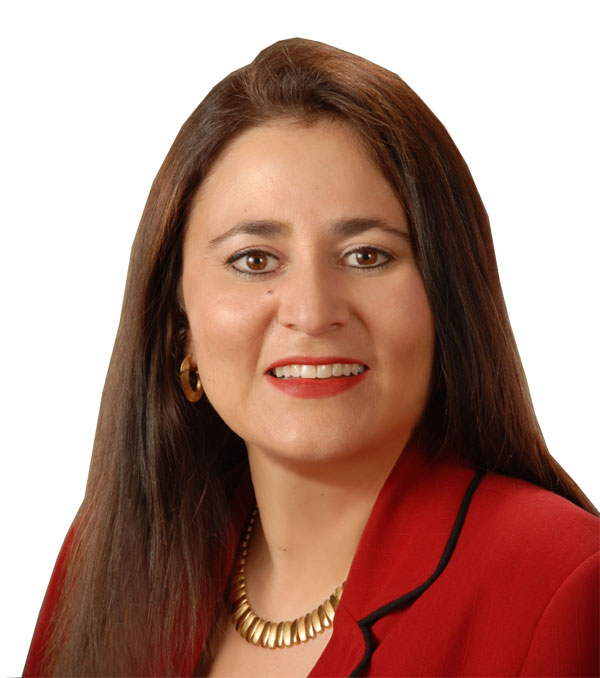 Gov. Doug Ducey, center, signs an agreement to create a Mexico desk by the Tech de Monterrey at the Phoenix NPR affiliate, KJZZ.

Governor Ducey launched our recent trade mission trip to Mexico City at a reception where he acknowledged Mexico as our friend and neighbor. I was honored to participate in the delegation representing our Tucson Hispanic Chamber and affiliated chambers in Sierra Vista, Douglas and Nogales. Repeatedly during the trip, Ducey spoke to the 45 business leaders and cabinet members and our Mexican guests about a “new day and a fresh start” for Arizona in Mexico.

Arizona currently trades over $15.9 billion a year with Mexico. Last year, trade grew by $1.8 billion without much attention by Arizona leadership. Gov. Ducey’s economic vision for the state includes a renewed focus on Arizona’s largest trading partner and an intention to repair damage and rebuild relationships since the passing of SB1070 five years ago.

Arizona business leaders on the trip were very engaged. Many of the businesses had deep ties to Mexico while others were exploring opportunities about potential industry partners and steps to doing business in Mexico. Delegation businesses included companies in such industries as transportation, legal, metal fabrication, real estate development and mining products.

Several important memorandums were signed during the trip. Most notably, the launch of a Mexico Desk by the Tech de Monterrey at the Phoenix-NPR affiliate, KJZZ; the University of Arizona’s signed memorandum with UNAM (the oldest and largest University in Mexico) and the opening of the UNAM office in Tucson; and a collaborative agreement to benefit Mexican children with custody challenges in the state of Arizona.

David Farca, the governor’s newly appointed president of the Arizona Mexico Commission, spoke passionately about Arizona’s opportunity to stop talking about Mexico and to start talking to Mexico. He said it’s a time of action and of “doing” within Mexico.

During an economic development panel discussion, the delegation learned more about the industrial park structure in Mexico, which represents over 2,300 tenants and 1.7 million jobs. Speakers also addressed President Pena Nieto’s federal reforms and the much awaited energy reform.  We learned that the recent Mexican gasoline shortage and lack of pipeline infrastructure led to Mexico’s interest in reform and discussed among us about opportunities in Arizona.

In addition, Arizona’s interest in the aerospace industry was reinforced by the discussion on the benefits of manufacturing aerospace components in Mexico. At their advantage is 1) lower manufacturing costs driven by labor, 2) proximity to OEM in the U.S. and 3) duty-free access to important aerospace market. Mexico’s aerospace industry has expanded dramatically from 109 to 280 over the last eight years, though this still equates to less than 5 percent of the market. With the concentration of aerospace in Sonora, this is a key opportunity for Arizona.

The Arizona delegation had the opportunity to meet with the secretary of economy and the minister of foreign affairs. During the meetings, our chamber distributed the Arizona Sonora Business Resource Guide, which has been created in partnership with the Arizona Daily Star and is a strong example of bi-national cooperation. Top of mind for the delegation during the meetings with federal leaders was transportation infrastructure in Northern Mexico and the Arizona ports of entry, namely Nogales.

One challenge identified was the imbalance of the market in Nogales. Eighty percent of the products at Nogales are imports from Mexico with 20 percent exports to Mexico. The cost of having empty commercial trucks returning to Mexico impacts profitability. Secondly, delays caused by the many transportation inspections also create a disadvantage to Arizona in comparison to travel routes to other U.S states. The Querobabi Military checkpoint, located 45 miles south of Nogales, causes delays for hours for commercial trucks heading north. Though additional investment by the Mexican government will assist with efficiency, there was conversation on the reality of eliminating the checkpoint in the future.

The trip to Mexico City was a great step in working to repair the perception of the state of Arizona. Our Tucson Hispanic Chamber and affiliated chambers in Douglas, Sierra Vista and Nogales are prepared to continue our work in Sonora to build relationships to benefit our economy and assist the governor in his vision of doubling trade with Mexico.

To join our conversation, members may attend our International Trade committee meetings, held monthly. On July 28, we are hosting an “Economic Impact of Arizona-Sonora Trade” luncheon in Tucson featuring Erik Lee, author of “U.S. Mexico Border In Transition.” The event will be followed by a similar luncheon in Phoenix on July 29 and on July 31, a workshop on “Doing Business in Arizona” and a similar luncheon in Hermosillo. Learn more at www.TucsonHispanicChamber.org.

As Tucson home values continue to rise, an online real estate brokerage firm is expanding into Pima County to help cut the costs for selling or buying a new home without commission fees.

On the Menu: You’ve got choices with the Heaven or Hell Margarita

When my cocktail arrived with a corked ampoule of liquor fastened to the glass with a miniature clothespin, I knew there had to be a story behind this spirit riding side-saddle.

By all accounts, Arizona has had a rough time through the COVID-19 pandemic. A staggering lo…