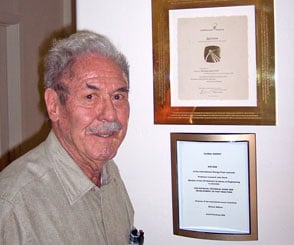 Koch’s research work in atomic energy was recognized as ground breaking, and is still being developed today. 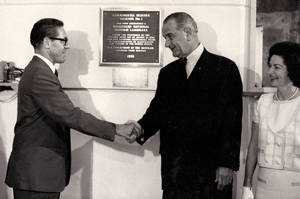 Koch’s memorabilia includes a photo of President Lyndon Johnson honoring his work.
1 of 2

Koch’s research work in atomic energy was recognized as ground breaking, and is still being developed today.

At 91, Leonard Koch is a dynamo when it comes to science and technology. Researchers half his age still treasure and use the work he did 60 years ago on atomic energy.

Someday, when America get serious about energy generation and usage, his writings and research still will have value. From his perspective, uranium has the potential to fuel the world.

Zinn was the lab's director and Fermi invented the reactor system.

Koch, who was working in Chicago as a mechanical engineer, heard about Argonne from a co-worker. And although he knew nothing about the nuclear power business, his curiosity and research and building of aircraft engines during WWII and utility engines afterward, got him an interview.

He met with Zinn, who was looking for engineers "with practical work experience." Koch was hired in 1948 and soon afterward, heard Fermi lecture about his vision for nuclear power.

"He was very interested in recycling fuel and extracting all the energy out of uranium. The lab had an experiment to prove his theory and as it turned out, that's what I was hired to work on," said Koch. "I remember driving home after the seminar and thinking, my

God, I'm in on the ground floor of something wonderful. I was very lucky to just fall into that opportunity."

Within three years, the Argonne team designed and built the world's first nuclear reactor called Experimental Breeder Reactor I (EBR-I). The project, at a remote military facility near Arco, Idaho, was designed to prove Fermi's concept, not to make electricity for commercial use.

"That was historic, the first electricity from nuclear power, when those light bulbs lit up. We all put our names on the wall by the generator, plain white chalk on concrete, afterwards. One of those light bulbs is at the Smithsonian today," Koch said.

Within days, the reactor was powering the entire complex. In 1966, the site became a Registered Historical National Monument.

An international industry was born that December.

Today, some 100 nuclear power plants provide about 20 percent of America's electricity. About 440 reactors are operating worldwide. As of January, 16 foreign countries have 65 more, new nuclear plants under construction.

In mid-1952, Zin transferred Koch back to Chicago to begin work on EBR-II. He became manager of that project, the nation's first "true power plant," that began operating in 1964 at the same Idaho site.

This assignment however, included a fuel reprocessing system to remove and recycle spent uranium from the reactor - the ultimate waste management system.

Proudly, Koch said "we proved the concept that if you recycled the fuel, you could extract all the energy out of it."

EBR-II operated for 30 years before closing. By that time, Argonne had achieved its scientific mission to provide safe nuclear energy for peaceful, civilian uses.

For Koch, who has retired to Oro Valley, the research he did at Argonne is a fundamental blueprint for nuclear plants yet to be built. Russia has used much of the lab's work and has emerged as the world's leading promoter of nuclear power, selling projects to China and India.

"Our research from 60 years ago is still being developed today. It will go forward into the future development of nuclear plants," Koch said.

"A pound of uranium, which is less than the volume of your fist, contains the energy equivalent of 5,000 barrels of oil, or about 200,000 gallons of gasoline. Uranium is a tremendously concentrated energy source, that's why you can make bombs out of 10 pounds of it," explained Koch. "We only extract about one percent of that energy. With just a little bit of arithmetic, uranium could supply all the electricity in the United States for at least 300 years."