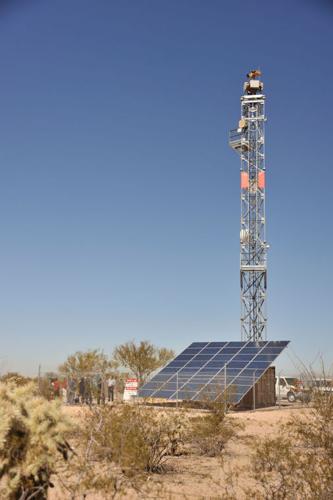 DRS Technologies built this 80-foot surveillance tower equipped with radar, cameras and infrared sensors. The company is one of nearly 60 border-security focused technology companies in the state 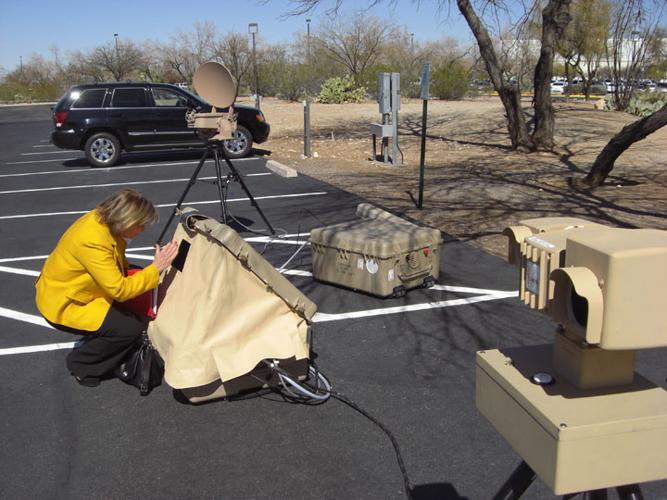 DRS Technologies built this 80-foot surveillance tower equipped with radar, cameras and infrared sensors. The company is one of nearly 60 border-security focused technology companies in the state

As issues of security along the U.S.-Mexico border continue to play a big role in regional and national discussions, the University of Arizona and a collection of private companies see an opportunity to be part of a solution.

“We have an emerging cluster in the border security and border technology arenas,” said Bruce Wright, associate vice president for the Office of University Research Parks at the University of Arizona.

Wright was speaking to a group of industry representatives and public sector officials gathered at the UA Tech Park, 9070 S. Rita Road, for the first annual Border Technology Showcase on March 1.

Wright said at least 57 companies in Southern Arizona work in the border technology and security sectors. Across the U.S., he said about 1,000 companies operate in the same filed, which accounts for a nearly $20 billion chunk of the national economy.

“That’s a pretty significant concentration of companies in that filed,” Wright said.

He said the region’s proximity to the border, major military installations and the intellectual resources of the UA make the region primed to become an even larger player in the arena.

One major player recently moved into space at the Tech Park in an effort to further develop and test its product line with the goal of scoring a U.S. Customs and Border Protection contact.

DRS Technologies, based in Arlington, Va., now has offices at the Tech Park where it field tests its border-security technologies as it prepares for consideration by U.S. Customs and Border Protection for its Integrated Fixed Towers program.

“It’s a natural fit for us,” said James A. Hynes, executive director of Homeland Security and Force Protection Programs for DRS Technologies. “We get a representative environment.”

Hynes, and colleague Richard S. Danforth, president of Integrated Defense Systems and Services for DRS Technologies, said the company already operates similar security and surveillance systems in parts of the Middle East, including Jordan and Egypt. It also has made systems for the U.S. military.

As part of its proving ground, DRS Technologies has built an 80-foot tower in the open desert south of its Tech Park offices.

Equipped with radar, infrared and high-resolution cameras, the solar-powered surveillance tower can monitor activity in a seven-mile radius.

From a command center offsite, operators can watch as people and vehicles move through the desert. In a real-world situation, operators in the command center would notify agents in the field of the activities the tower system had located, perhaps drug or human trafficking, and apprise them of the location of the suspect activity.

“Border security is trying to identify the bad guys in a group that mostly represents good guys,” Danforth told the invited group.

In addition to DRS Technologies, several other vendors were invited to display their products.

Some have already received considerable attention, such as the Automated Virtual Agent for Truth Assessments in Real-Time (AVATAR) kiosk.

The system has a series of small cameras and sensors and a monitor displaying a human avatar on a screen who poses questions to users. The system, developed by UA researchers at the national Center for Border Security and Immigration, was designed to aid in screening people crossing the border into the United States.

Last year, the kiosk was field-tested at the DeConcini Port of Entry in Nogales.

Justin Giboney, a UA doctoral student and research assistant on the project, said the system likely is several years from a commercial rollout. When it is ready, however, he envisions it would be useful not only in border activities, but in screening of prospective employees in private sector companies.

“Border security is trying to identify the bad guys in a group that mostly represents good guys,” Danforth told the invited group.

The Rio Nuevo downtown development district unanimously approved multiple projects at their most recent meeting. Among these projects is a multiphase hotel and residential complex on Sixth Avenue just north of the Union Pacific train tracks. The project will take up the entire block, located…

Surrender to the inevitable at Portal

With mask mandates expiring, and many of us rightfully dragging our Zoom apps into the recycle bin, local businesses across Southern Arizona are celebrating what it means to be social again.

Legal Perspective: Protecting your business website from fraudsters looking to hijack your clients

A thriving local economy, in which businesses can grow and where every member of the communi…