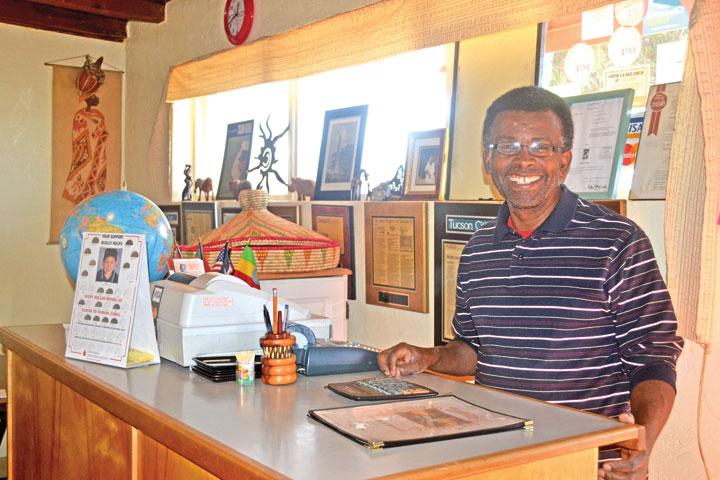 Owner Amanuel Gebremariam behind the register at Zemams Ethiopian Cuisine. 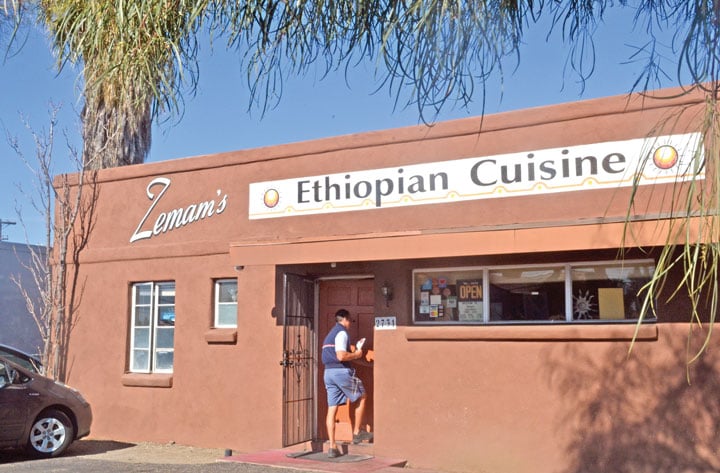 Owner Amanuel Gebremariam behind the register at Zemams Ethiopian Cuisine.

Amanuel Gebremariam casually paces his restaurant, Zemams Ethiopian Cuisine, taking orders, checking up on customers, and bringing out food. Manager, cook, waiter, busser, he does it all.

“I want to monitor everything,” Gebremariam said.

Gebremariam came to the U.S. as a refugee more than 30 years from from Eritrea, an East African country just north of Ethiopia. After receiving an education first at the University of Maryland to study English as a second language and then the University of Arizona for a business degree, he worked a number of respectable jobs before concluding he wasn’t happy with what he was doing and decided to take a different path: the restaurant business.

“My mother showed me how to cook, and I named the restaurant after my mom,” Gebremariam said.

As with any business, it can be hard to make your business known and establish a solid clientele. However, with a good approach and mind set, Gebremariam feels anything is possible.

“In business you have to have good service, good location, and most of all, a good price,” Gebremariam said. “In a restaurant, you have to have consistency. There is no margin of error. If one customer is sick... you lose every customer. But above all, it’s none stop job, you finish the days work, you season for tomorrow, tomorrow comes, seven days a week.”

Zemams presents a down tempo ethnic environment. The walls are plastered with African décor. The table layout is reminiscent of a small hometown diner. Faint Ethiopian lounge music sooths the nerves. All of which are characteristics that make this quaint restaurant so unique.

“I’ve been going to Zemams for a couple years now, and I love it,” said Emily Thompson-Bruder, a dance instructor. “I find it better than the other Ethiopian place downtown. The food is just better and I dig the environment.”

The other location Emily referred to is Cafe Desta, an Ethiopian restaurant that opened about two years ago and is slightly more modern in appearance. Instead of feeling threatened by the new establishment, Gebremariam embraces it.

“I love that restaurant,” Gebremariam exclaimed. “It gave exposure to the African cuisines. See, if Tucson can support 20 Mexican restaurants, seven or 10 Chinese, and some other ethnic foods, why not two African? So I have to compete. If he does better than me, I have to try to do better than him — it keeps me on my toes. He’s a good friend of mine too.”

The lack of concern may also have to do with Zemams longevity and the countless recognitions it receives on its food, including the Tucson Weekly’s Best of Tucson and the Tucson Zagat Survey.

For nearly 20 years now, Gebremariam has managed to keep his business afloat and says he has had very little difficulty maintaining success, even with the recession of the past few years.

“I’m really fortunate, you know, with all the economic turn around, ups and downs, it hasn’t affected me, its very consistent,” Gebremariam said.

He attributes much of his success with having stayed small, local and not overextending himself.

“We know almost all of our customers by name,” Gebremariam said with a chuckle.

“Amanuel’s great,” exclaimed Grant Kadowaki, a videogame designer. “He’s always here working during lunch, so I try to go during that time to say hello.”

After resisting for so many years, Gebremariam is finally looking to expand.

“We are planning on opening another restaurant around the Fourth Avenue area. I am looking for property to buy. Once I buy that property, I want to do an upscale Ethiopian restaurant,” Gebremariam said.

The new restaurant will have a full bar according to Gebremariam, a feature Zemams does not have and instead accommodates by having a bring-your-own-bottle policy and a $1.50 corking fee.

Gebremariam also plans on featuring new recipes at the new restaurant, the identity of which he insists be kept secret.

“All recipes are my mom’s, I’m trying to expand them now, since my mom’s perspective was a little bit narrow,” Gebremariam laughed out. “Americans like to eat with a fork and knife, so these recipes will be meant to be eaten this way.”

Although Zemams provides customers the opportunity to use knives and forks, the owner and staff recommend eating the traditional Ethiopian style, with your hands. But don’t panic, diners are supplied with a hearty amount of traditional injera — sour pancake bread made of a North African cereal grass called teff — which is used an edible utensil.

With only 16 main dishes on Zeman’s menu ranging from $9.25 to $13.75, and a combination platter option in which three dishes can be sampled, diners can try virtually every dish offered in only a handful of visits.

“We are always busy,” Gebremariam said.

He attributes his success to not only his hard work, but to the opportunities his adopted country provides.

“Coming as a refugee to the United States, it’s a relief, because I don’t think anyone knows unless he or she has been a refugee themselves what to be a refugee is,” Gebremariam explaind. “We come scared, afraid, tortured, everything that could apply to any human being in a negative way. Here you come to this wonderful country that opens its hands, its house, and its heart. I came with a lot of hope, and a lot of happiness, cause the first time I came here, this was the first time I saw people smiling everywhere, in a refugee camp, you don’t see things like that.”

“Coming as a refugee to the United States, it’s a relief, because I don’t think anyone knows unless he or she has been a refugee themselves what to be a refugee is,” Gebremariam explaind. “We come scared, afraid, tortured, everything that could apply to any human being in a negative way. Here you come to this wonderful country that opens its hands, its house, and its heart. I came with a lot of hope, and a lot of happiness, cause the first time I came here, this was the first time I saw people smiling everywhere, in a refugee camp, you don’t see things like that.”