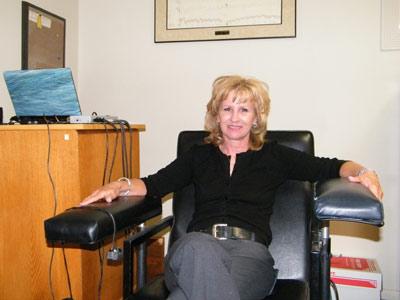 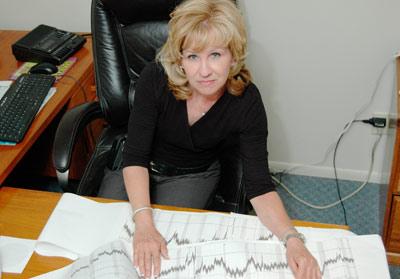 Venida Kay Docter with sample polygraph charts. “If you took polygraph charts themselves into court, not a soul could tell you what they meant. But my opinion is admissible in court a lot of times. My opinion, my considered professional interpretation, is allowed because I’ve become an expert in interpreting the test readings.” Patrick McArdle photo
1 of 2

Venida Kay Docter with sample polygraph charts. “If you took polygraph charts themselves into court, not a soul could tell you what they meant. But my opinion is admissible in court a lot of times. My opinion, my considered professional interpretation, is allowed because I’ve become an expert in interpreting the test readings.” Patrick McArdle photo

This is one test you don’t need to stay up late to cram for. In fact, there’s no studying involved.

“Just walk through the door, sit down, and tell the truth. It’s that simple and the easiest test you’ll ever take with a guaranteed passing grade — as long as you just tell the truth,” says Venida Kay Docter, owner of Southwest Polygraph Service Inc.

Administering lie detector tests is what she does and if her company had been around when George Washington was supposed to have chopped down a cherry tree, let’s just say he wouldn’t have had to wrestle with his conscience over a decision about whether or not to tell the truth.

“Probably about 10 percent of the people that I test are shuckers and jivvers who know coming through my door they’re going to try and lie,” Docter says. It doesn’t generally work however. “Accuracy of the process is 89 to 93 percent based on controlled experiment testing.”

Docter got into the business by happenstance. After 25 years in the legal field, she retired and while looking for part-time work, answered an advertisement for an office worker at Southwest Polygraph Services, a firm that was started in 1972. “I got the temp job at this company in 1997, went to polygraph school in 1999, and took over as owner in 2004.”

Although the recession and budget cuts have reduced the client load somewhat, Docter estimates over a good year, she and another examiner may conduct between 1,700 and 1,800 lie detector exams. “Polygraph examiners are not rich by any sense of the word, but we survive doing what we do and I’ve run thousands of exams in the last decade.”

The largest percentage of her business comes from law enforcement, pre-employment testing and for those moving from one agency to another. Southwest Polygraph Service also contracts to probation departments for sex offender testing, with attorneys and on occasion does private testing concerning issues involving marital infidelity.

The protocol is simple enough: Fill out a lengthy questionnaire as part of a pre-test interview conducted by Docter where test takers get a chance to give explanations rather than just “yes” or “no” answers. “Then I formulate the questions I’m going to ask on the test itself,” she says, noting that once hooked up to the electronic monitoring device, it takes about 25 minutes to run the actual polygraph.

“Nervousness, anxiety, medication, panic — all that stuff won’t make you fail a polygraphy test,” says Docter. “Being devoid of emotional response, cool, calm, and collected, isn’t going to make you pass the test either.

“This is a totally interesting — no, downright fascinating — field of work because even though the actual testing processes and techniques are the same, the individuals being processed aren’t and this uniqueness of each human being accounts for the difference in results,” she says.

While the tests themselves may be questionable and paper squiggles not admissible as evidence, Docter not only administers the exams, but is frequently called into court to explain their results.

“If you took polygraph charts themselves into court, not a soul could tell you what they meant. But my opinion is admissible in court a lot of times. My opinion, my considered professional interpretation, is allowed because I’ve become an expert in interpreting the test readings.”

Docter feels that in the early days, politics frequently came into play about the inadmissibility of lie detector tests in court and the level of professionalism of those who conducted and interpreted the tests. “Years ago polygraph may not have been all that professional, but over the past couple of decades, we’ve tried to upgrade the operation and those involved. People might think there’s a certain amount of hocus pocus here, but this is a professional occupation,” says Docter who served for five years as president of the National Polygraph Association. “You have to be schooled and certified before you can set out your shingle and start doing tests. You have to be certified to run each of the different kinds of tests and enroll in continuing education on an annual basis.”

While testing emotions run a gamut from humor to pathos, the nature of the work requires a steady professional demeanor.

“There are some emotional things that go on in this kind of work and you’re supposed to put on a mask and not display any of your own feelings. Sex offender testing is particularly difficult. But while some display nervous laughter, they’re not cracking jokes and most just want to get from point A to point B and out of here as quickly as they can.

Building a strong foundation: The construction industry thrives in a virtual age