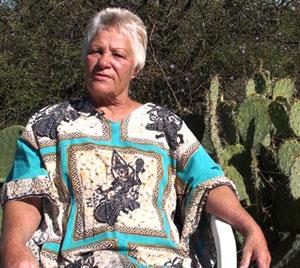 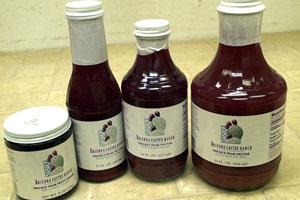 A sampling of the spreads and sauces made from prickly pear fruit by Arizona Cactus Ranch. Maria Konopken, Cronkite News Service photo
1 of 2

A sampling of the spreads and sauces made from prickly pear fruit by Arizona Cactus Ranch. Maria Konopken, Cronkite News Service photo

The acres of prickly pear at Arizona Cactus Ranch near Green Valley produce nectar and fruit spreads that owner Natalie McGee sells over the Internet and through markets around Arizona. But those products offer only a narrow look at the cactus’ potential, she said.

Consumers are drawn increasingly to the promise of prickly pear’s health and medicinal benefits, and McGee said more and more Arizonans will discover that prickly pears gracing countless landscapes around Arizona are more than just pretty.

"We often take for granted that we have this plant in our own yard that is not only decorative but could improve the quality of life in medicine and even food," McGee said.

The cactus’ deep red, pear-shaped fruit, which usually is harvested in August and September, also lends its sweetness to candy, syrup, health drinks and even exotic margaritas. Its pads, removed of their spines, provide meat that goes in burritos, soups and other recipes.

McGee, a former social worker, started harvesting prickly pear on her ranch in 1991. She said she’s learned over the years that the prickly pear is more than just a plant.

"It is not an accident that it is growing everywhere from someone’s front yard to the middle of nowhere desert," she said. "It’s unique and a part of Arizona. It belongs here."

The prickly pear can reach 6 to 8 feet tall and thrives in warm, dry climates. Its many varieties are found predominantly in the Southwest, but it also grows in Mexico, parts of South America and even in southern Europe.

Scott McMahon, curator of cacti at the Desert Botanical Garden in Phoenix, said the prickly pear could have greater potential as a niche crop for Arizona. But he said that idea hasn’t received much consideration.

"There haven’t been a lot of studies done because research tends to only be done on plants that have some economic value," McMahon said. "Although the prickly pear might to some degree, it has not been investigated enough; not enough is known."

Prickly pear have traditionally been harvested as part of Hispanic and Native American diets. It’s promoted in those cultures as offering health benefits, including helping diabetes and lowering blood pressure and cholesterol levels, and one University of Arizona study has suggested that prickly pear pectin could help with one type of cholesterol. But Fred Wolf, a UA professor emeritus of nutritional science, said there hasn’t been enough research to prove such health benefits.

"There have been many testimonials that have said it has helped them or someone they know, and I do not want to take away from that," Wolf said. "But without some more research, the claims may be premature and could be a disservice to the public."

Jesus Garcia, an educational specialist in evolutionary biology at the Arizona-Sonora Desert Museum, said that research could follow as consumers become more aware of the stated health benefits of the prickly pear.

"Little by little, the movement of people wanting to change their health is becoming louder," Garcia said. "When they hear maybe a plant they have in their backyard could help them, the demand for the product and more research will go up."

"It is a specialty of the Southwest for tourists, even residents, who buy the candy, jelly and leaves to use," Casciado said. "It helps not only our company but companies in Arizona to have a novelty item you can only get here."

"This simple plant grows in harsh conditions, doesn’t ask for much, but what it can give in return, the nectar and pads, could be the savior for us in either health or with the production of products," she said. "We just need to discover all that it can do."

The new year brings a new list of transportation projects throughout Pima County, including repairs to Oracle Road, work on Interstate 10 and residential road repair in Oro Valley.

On the Menu: Whiskey, meat boxes and, of course, COVID: 2020’s top columns

While I’m just as thrilled as anyone to put 2020 behind me, I’m grateful for the passion and perseverance demonstrated by our local chefs, restaurateurs, brewers, winemakers, and distillers last year as they faced their most challenging of times.

Tucson’s momentum to spur success in 2021

I am beginning 2021 with a sense of optimism.

Just one week ago, members of the 117th Congress took the oath of office. Raising our right …

The future of Arizona’s economy is one of uncertainty, UA economist George Hammond made clea…

While 2020 has been a challenging year economically, particularly for a region like ours whe…