Welcome, Guest
HOME
ABOUT US
EVENTS
NEWS
OPINION
PEOPLE IN ACTION
ON THE MENU
CALENDAR
NEWSLETTER
BOOK OF LISTS
Jobs
1 of 2 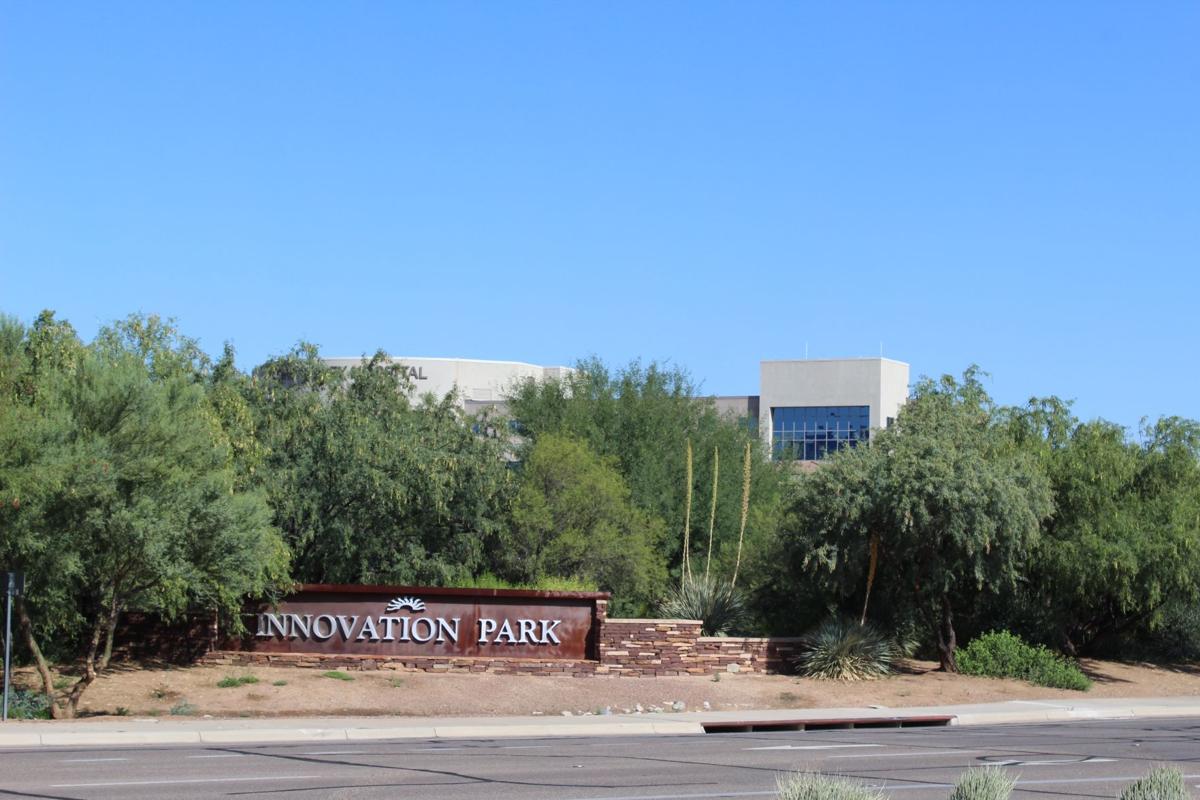 Oro Valley Innovation Labs, to be built within Innovation Park,  will  include 4,000 square feet of office space. 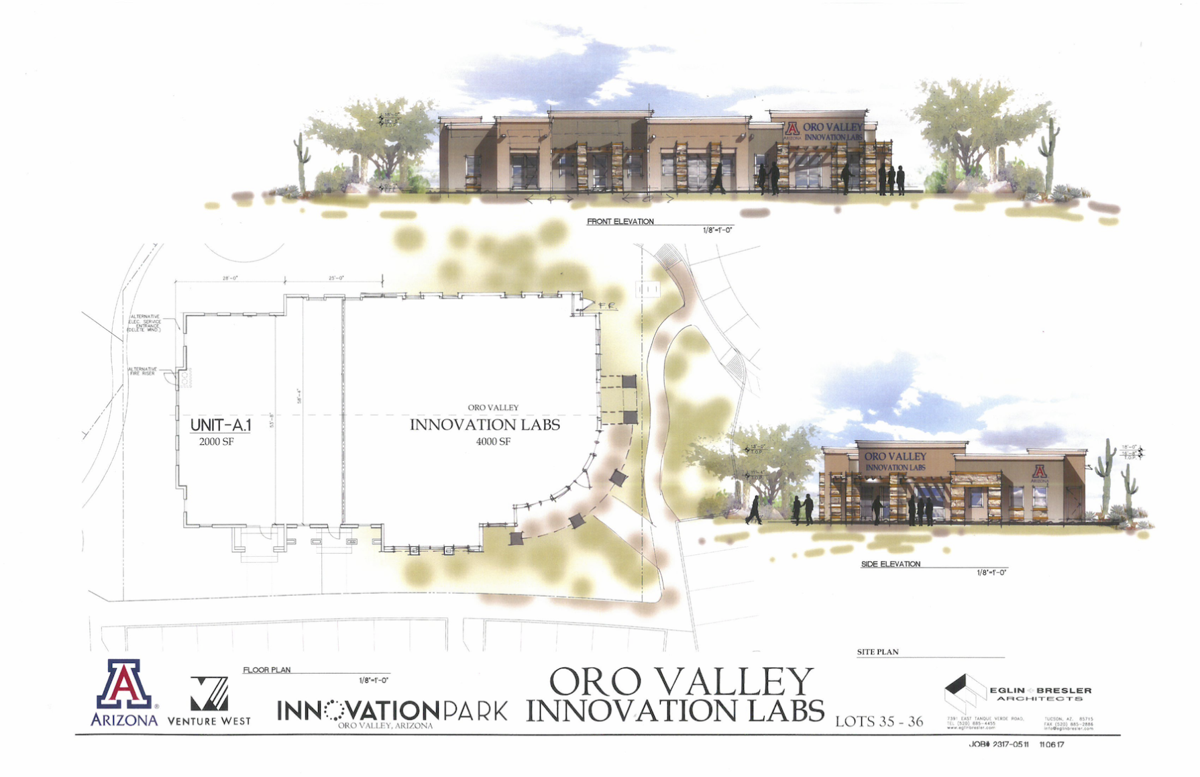 Blueprints of the Oro Valley Innovation Labs, which include 4,000 square feet of office space.

Oro Valley Innovation Labs, to be built within Innovation Park,  will  include 4,000 square feet of office space.

Blueprints of the Oro Valley Innovation Labs, which include 4,000 square feet of office space.

Oro Valley’s life science industry is growing even larger with the scheduled groundbreaking of the Oro Valley Innovation Labs announced for Wednesday, September 4. OVIL is a business incubator planned to be built in Innovation Park, and like its neighbors in the park, will focus on furthering research in the biomedical industry. But OVIL holds a special industry role: fostering collaboration and providing a space for emerging businesses.

OVIL is tentatively planned to open March 2020. However, its foundations date back more than five years to when local scientists and business leaders sought to create a “business incubator” to work in conjunction with existing bioscience companies in Oro Valley like Ventana Medical Systems (a member of the Roche Group) and Icagen. Whereas these existing companies have thrived independently in Oro Valley’s Innovation Park, the goal for OVIL (initially known as BioSA Innovation) was to foster inter-business collaboration and convert research findings into new technologies.

“It’s been a long road, so we are really happy to finally see it taking off,” said OVIL board of directors chairman Dr. Paul August. “There’s plenty of support when you conceptualize building a business incubator like this, but it gets more difficult when you need the funds to build the architecture to support it.”

Oro Valley and Pima County initially attempted to fund the 50,000-square-foot “BioSA Innovation” building via bonds, but voters rejected this plan in 2015. Venture West then stepped forward with a plan to develop the current model at 6,000 square feet.

Then the University of Arizona got involved. In November 2018, UA president Robert C. Robbins unveiled the college’s new Strategic Plan. This plan included a commitment to “be an integral and collaborative partner with our local and global communities.”

With the university signed on, the Town of Oro Valley joined in May 2019 with additional funding, pledging $10,000 this fiscal year and $50,000 next fiscal year. In June, Pima County signed up to match the pledge.

“All the region’s major players are involved: The University of Arizona, UA Center for Innovation, Pima County, the Arizona Commerce Authority, the Town of Oro Valley, Venture West, and major corporate neighbors such as Icagen and Roche, among others,” said Joe Snell, president & CEO of Sun Corridor Inc., who is a member of OVIL’s board of directors. “We know from working with bioscience companies, from startups to growing tech firms, the demand is there and we’re confident this incubator will be filled quickly.”

According to August, OVIL needed $315,000 to cover the costs of construction. They’ve already received roughly half a million dollars. Other than local governments, the money comes from local philanthropists and businesses like Roche, Icagen and Tucson Electric Power.

“Oro Valley just wants strong business,” said Dave Perry, president and CEO of the Greater Oro Valley Chamber of Commerce and OVIL board member. “When you create high-paying jobs like this in a place like Oro Valley, the rest takes care of itself. They help create and complete the community around them.”

As for the physical design of the facility, OVIL is slated to be built near Ventana Medical Systems in Innovation Park. The building will hold 4,000 square feet of both lab and office space, with plenty of room for expansion depending on demand and funding. While offices will constitute the majority of the Innovation Labs, there are plans to include room for laboratories, conference facilities, a biorepository and informational technology spaces.

Beyond biotechnology, the building can also house companies in the diagnostics, therapeutics, medical, app development and information technology industries.

August said the building is primarily designed for startup companies of four to six employees. The current blueprints can comfortably house roughly eight startups of this size.

“We’ve had a number of companies that said they’d like to look at the space,” August said. “And a lot of these are coming from the UA.”

According to diagrams of the facility, nonprofit agencies and academic centers can be housed next to each other to further multidisciplinary interaction. This shared space is aimed at promoting “the creation of successful applications for funding/investment, development of business plans, including counsel for preclinical and clinical trials, device approval and reimbursement, and manufacturing.”

“Think of it as a startup environment,” Perry said, “There are other places like that in Tucson, and now Oro Valley will have one.”

With UA’s involvement, OVIL has a connection to the university’s own business incubator: Tech Parks Arizona. However, August said Tech Parks Arizona might as well be in Phoenix for someone trying to start a business and stay in Oro Valley. OVIL’s goal is to create something local and to recruit talent into Oro Valley.

“We’ve taken a lot of cues from Tech Parks, but it’s not something we’re trying to duplicate,” August said. “We really want to create a life science cluster. We want a mass of technology for high-quality job opportunities in the area.”

There are also plans for OVIL to include training programs to turn scientific observations into real-world results. These programs include how to conduct research and development for products in accordance with HIPAA regulations, Medicare standards and FDA standards. Other planned programs include how to utilize free, open-source software for research and how to obtain laboratory evidence for the value of a scientific observation.

While the current plans call for a far smaller building than originally planned, Innovation Park holds plenty of room for OVIL’s expansion. However, before any of that, the ground must be broken.

“It could really be a game-changer,” Perry said. “People should keep an eye on the Innovation Labs and recognize that our collective investment will yield positive results for the community.”

Take a bite out of history with some Wild West fare

Tucson was every bit the Wild West to me when I moved here in the late 1970s, a big change for a kid who spent his formative years just outside the Capital Beltway in suburban Washington, D.C.