Skip to main content
You have permission to edit this article.
Edit
Welcome, Guest
HOME
ABOUT US
EVENTS
NEWS
OPINION
PEOPLE IN ACTION
ON THE MENU
CALENDAR
NEWSLETTER
BOOK OF LISTS
1 of 2 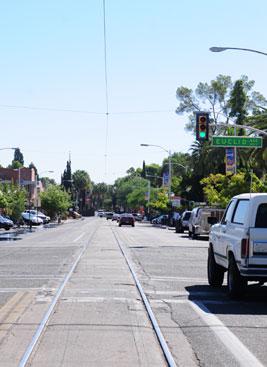 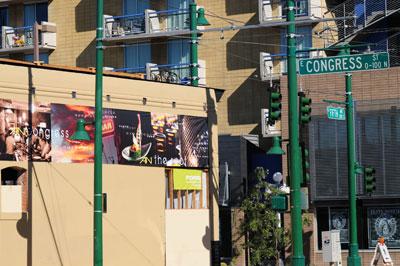 Many businesses have staked their claim along the proposed streetcar line including Kwang C. An who will open An Congress sometime next year. Joe Pangburn photo
1 of 2

Many businesses have staked their claim along the proposed streetcar line including Kwang C. An who will open An Congress sometime next year. Joe Pangburn photo

The City of Tucson wants to create four areas of growth and development around its planned streetcar line.

They are areas where city officials hope to create an opportunity for transit oriented development.

Charles Hales, senior vice president at HDR Engineering in Portland, Ore., who presented the case to city officials, said the foremost element that can foster development around a transit line is supportive land use plans.

Ernie Duarte, director of the city’s Planning and Development Services, has identified areas where development could occur and is working on land-use planning.

Jim Mazzocco, a planning administrator in Duarte’s department, is the lead on the project.

“First, we are looking at the area of the streetcar line between Euclid and Park along University,” Mazzocco said. “In the 1980s, a policy was put in place that put a 40-foot limit on development in that area. Every time someone has come to ask for an exception it has been granted, but we are going to ask the mayor and council to revisit the 40-foot height limit and see what height might be more practical. This could encourage mixed-use developments in that area where more people could walk to the streetcar.”

Duarte said the next area is an infill incentive district along Stone Avenue, Oracle Road, Sixth Avenue and 12th Avenue. “The boundaries for this district were created in 2006 and development within this district allows relief from some certain land use code requirements such as parking, height and others for projects more in line with urban type development.”

Within the infill incentive district is another area Mazzocco calls the downtown core.

“Within this area, there is a greater set of dimensional requirement relief,” he said. “We are asking for developers to utilize some of the best practices of urban design and in exchange all sorts of things are waived for them.”

Some of the best practices include: parking to be located around back or on the side of the building; if there is a parking garage, the first floor must be screened from view. The first floor of buildings should have see through windows and door and shade structures are encouraged along the street. Buildings are also encouraged to be near the sidewalk.

For developers’ cooperation in use of some of the best practices, the city would be able to waive setbacks, floor area ratios, lot coverage maximums, landscaping requirements and parking requirements. These waivers are dependent on the submittal of acceptable streetscape plan and a transition plan, if necessary.

“So the city is really getting something back for allowing the waivers,” he said. “We are working on getting this area’s incentives through the planning commission and we hope to put it before the mayor and council in late September.”

The final area is called the Downtown Links overlay. It runs along the Union Pacific railroad tracks north of the warehouse district, crossing Fourth Avenue over to Interstate 10.

“Currently most of that land is zoned for industrial, but the city Transportation Department hired a consultant to review that area and we are now following up with a design study to allow for a zoning option in this area,” Mazzocco said. “We are looking to put in medium to high-rise type development here. This change will provide a lot of flexibility there for infill development you can’t do right now.”

He said the mayor and council adopted an urban overlay district ordinance—which is an enabling ordinance which allows the rezoning to occur.

“We knew the concept and where we wanted to go, but we didn’t have a vehicle for it,” Mazzocco said. “This will help us get that done.”

Mazzocco said the Downtown Links project is a key area for growth and has the most opportunity to change and be redeveloped as it doesn’t have as many historical preservation buildings in it.

The work isn’t over yet on their part. Mazzocco is working with the city’s Housing and Urban Development Department on an application for a national HUD Community Challenge Grant.

“Our local HUD put in a pre-application and was accepted so now we’re working on the actual application which is due by the end of the month,” Mazzocco said. “With this money we would be able to do a further planning study along the streetcar corridor, looking for opportunities or places we’ve missed for transit oriented development locations. Now it’s not guaranteed, we’re just applying, but we are going to take advantage of any and all opportunities we can to look at this.”

So far there has been some interest in developing along the route from the private sector, according to Mazzocco.

“We’ve had a few nibbles here and there,” he said. “Some are very interesting proposals, but we’d like to see what other proposals come forward as well. We’d like to see many of them come to fruition in the areas we want to make progress.”