You have permission to edit this article.
Edit
Welcome, Guest
HOME
ABOUT US
EVENTS
NEWS
OPINION
PEOPLE IN ACTION
ON THE MENU
CALENDAR
NEWSLETTER
BOOK OF LISTS
Jobs
DONATE!

PHOENIX – As Arizona bars have reopened after months of being shut down during the COVID-19 pandemic, owners and managers are struggling to comply with state health department regulations that require logistical twists.

One Phoenix bar owner has adapted by moving operations outdoors while another said he has three bars with different limitations.

“You’re allowed to be open but you can’t really function,” said Frank Vairo, who owns bars in Phoenix.

Businesses can only reopen by meeting specific requirements set by the Arizona Department of Health Services. A hotline and online form are available to report complaints on the department’s website.

As of Sept. 3, the department has received 1,200 complaints, with 75% in Maricopa County – but the level of enforcement isn’t clear. Some bar owners and a health official say the system doesn’t work.

“You have this environment where bars and nightclubs are opening, and the open question to me is, what does the compliance system look like for ensuring bars and nightclubs operate safely?” said Will Humble, executive director for the nonprofit Arizona Public Health Association. 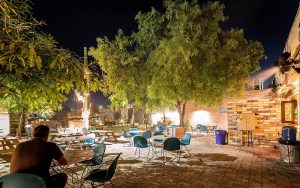 The patio at Thunderbird Lounge lends itself to social distancing. Some owners and managers of other bars are struggling to comply with state regulations. (Photo courtesy of Charles Barth)

Businesses affected by a reopening pause in June were allowed to partially reopen without direct approval from the AZDHS if their county’s transmission level was listed as moderate or minimal for at least two weeks. The only requirement is to sign a form that states their commitment to the guidelines.

Bars and nightclubs must follow the requirements listed by the AZDHS according to their county’s community spread level. In the “moderate” level, bars and nightclubs can open at 50% capacity only if converted to a restaurant service.

The requirements for restaurants and bars include social distancing measures and mask mandates. Dancing, karaoke, and games of darts or pool are not allowed.

Jamie Bates is the manager of Bull Shooters Billiards & Sports Bar in Phoenix.

“I wish they could assess each business on its own,” Bates said. “We’re a pool hall first, so we have 45 pool tables, 15 dartboards, and that’s what people come here for. So, when one of the mandates is, ‘no parlor games’ – we might as well not even be open, honestly. That’s really hurting us.”

The state has shut down three bars.

Two Scottsdale bars were cited for violating state restrictions on their first day of being open. Casa Amigos and Bottled Blonde were ordered to shut down immediately, according to news accounts. A Tempe bar, Glow Shot and Cocktails, also was ordered to close.

The Arizona Department of Liquor Licenses and Control suspended the liquor licenses of Casa Amigos and Bottled Blonde on Aug. 28 for not following the guidelines, according to a news release. Representatives for Casa Amigos declined to comment. Bottled Blonde and Glow Shots and Cocktails could not be reached for comment.

“Detectives will continue to enforce public health orders and take immediate actions against licensees who are observed showing general disregard for the welfare and safety of others,” John Cocca, Department of Liquor director, said in the news release.

According to the department’s May report, it conducted 225 routine liquor inspections by the end of the fiscal year in June. Since July, there have been 166 routine inspections.

The AZDHS website has a hotline and online form to report establishments that are not complying with Centers for Disease Control and Prevention guidelines for general health safety or abiding by AZDHS requirements for businesses.

It’s not popular with some bar owners.

“I don’t like it at all,” Bates said. “It forces us to walk on eggshells. Even if we’re doing everything right, if we make someone mad at all or they get mad, they can complain for any reason.”

Ronetta Andersen, who has owned Final Round Sports Bar & Grill in Tempe for seven years, says her regulars are keeping her afloat.

“Supposedly, with this hotline that they’ve set up, I guess people can turn in whoever if they feel like they are not following those guidelines,” Andersen said.

Andersen said everyone – including customers and employees – wears a mask in Final Round, and tables and chairs have been set up 6 feet apart. Along with continuous sanitizing, Andersen sticks with the 50% capacity rule from the AZDHS – but she is not convinced the bars are reported fairly to the AZDHS.

An ADHS spokeswoman said over email, however, that many steps are taken before an establishment is closed down for a violation.

“ADHS coordinates with the local public health departments and the Department of Liquor Licenses and Control (DLLC) to verify complaint claims prior to implementing any enforcement action,” wrote ADHS spokeswoman Holly Poynter. “While we are committed to strict enforcement of the requirements outlined at www.azhealth.gov/businessCOVID19, we do our best to work with businesses to bring them into compliance first.

“If a business is found to violate the COVID-19 prevention requirements, ADHS consults legal counsel on potential next steps. This may include seeking a temporary restraining order, issuing a citation, or even the immediate temporary closure of an establishment until health guidance is met,” her email said. 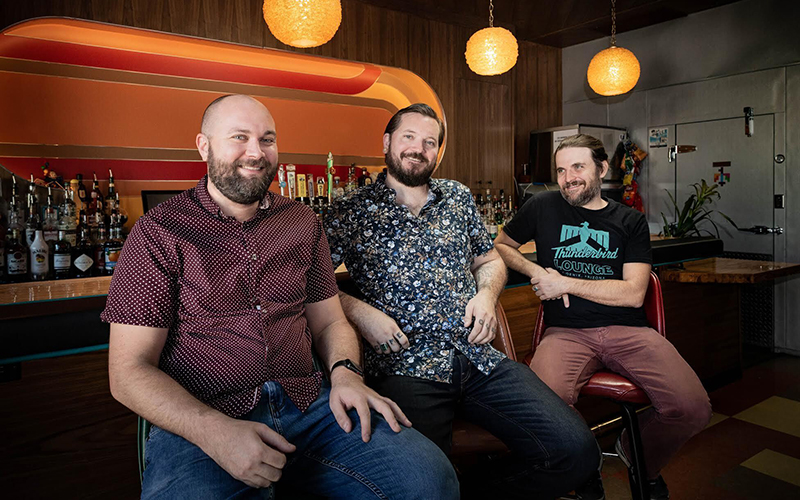 A Phoenix bar owner said he has been able to adapt.

Jeremiah Gratza, a co-owner of Thunderbird Lounge in Phoenix, switched his bar to a restaurant style of operating. He said they set up 25 tables in their 4,000-square-foot patio. A host seats customers after taking their temperatures. Bartenders take drink orders at the tables.

“You never have to get up and leave your table,” Gratza said.

Thunderbird Lounge has received positive feedback from customers, he said, adding that visitors have respected the new rules and have been “super friendly, super warm and super inviting.”

But Frank Vairo, owner of three bars in Phoenix, said he has had trouble adapting to state requirements at every location: The Bar is small, making it harder to meet social distancing guidelines. The Dilly Dally is a larger space that allows for better social distancing, but people still have to wait to enter if it is at 50% capacity. At The Breakroom, which is a pool hall, guests cannot play pool or dance because of social distance guidelines.

“They’re not our rules but we have to uphold them,” Vairo said. His restaurant, Nook Kitchen, had to permanently close due to the pandemic.

Humble, the public health advocate, wonders whether the state can bring bars and restaurants that don’t have safety protocols into compliance.

“I don’t know if there’s going to be a decent enforcement program – which means that the bars and nightclubs will likely start amplifying the virus, as happened in May and June,” Humble said. “Unless they put in a good compliance system to ensure nobody cheats.”